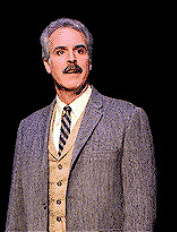 Our Town, Auburn University Theatre
Dan LaRocque served as Associate Dean for Academic Affairs in Auburn University's College of Liberal Arts from 2011-2013 and was Chair and Artistic Director of Auburn University Theatre from 2005-2011. He also served on the National Executive Committee of the Kennedy Center American College Theater Festival from 2000-2009, serving as KCACTF Chair and Vice Chair of Region IV (Southeast), and as a respondent for more than 100 college theatre productions throughout the country. He received the Kennedy Center Medallion for Excellence in 2007, and was a 2016 recipient of Auburn University's Gerald and Emily Leischuck Endowed Presidential Award for Excellence in Teaching. His one-act play, Man Woman Flower published by Playscripts, Inc. has been produced professionally Off Broadway at the Harold Clurman Theatre in New York and by the West Coast Ensemble Theatre in Los Angeles, and has enjoyed an extensive amateur production history in The United States, Canada, Australia and England. Dan has been teaching acting, voice, and movement in Auburn's BFA Theatre Performance program since 1990, and he's directed or appeared as an AEA Guest Artist in more than forty Auburn University Theatre productions. 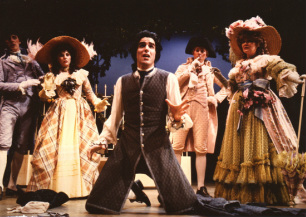 The Rivals, Alley Theatre
Dan was actively involved in the creation of Auburn's Music Theatre major, and in efforts to realize a long-term department goal of adding a black box studio theatre space and dedicated dance studio to the Telfair Peet Theatre facility. His professional acting credits include appearances in theatres throughout the country including San Diego's Old Globe Theatre, Houston's Alley Theatre, Richmond's Theatre Virginia, and the Utah, North Carolina, Illinois, and Alabama Shakespeare Festivals. In England, he appeared at Alan Ayckbourn's Stephen Joseph Theatre in the Round and his television and film credits include appearances on All My Children, Guiding Light, and in the feature film Above Suspicion with Annabella Sciorra and Scott Bakula. With producer Kelly Walker, Dan co-founded the Auburn University Radio Flyer Theatre Company, and he has adapted, directed and performed in radio plays by authors ranging from O. Henry to Hans Christian Anderson. 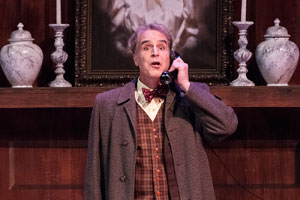 MacBeth, Utah Shakespeare Festival
As Auburn University Theatre continues to grow and thrive within Auburn's College of Liberal Arts, I salute our talented students and my dedicated colleagues who work tirelessly in support of theatre and the performing arts at this great university.